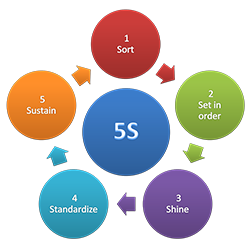 5S Housekeeping is the name of a workplace organization method that uses a list of five Japanese words: seiri, seiton, seiso, seiketsu, and shitsuke.Transliterated into Roman Script, they all start with the letter “S”. The list describes how to organize a work space for efficiency and effectiveness by identifying and storing the items used, maintaining the area and items, and sustaining the new order. The decision-making process usually comes from a dialogue about standardization, which builds understanding among employees of how they should do the work.

In some quarters, 5S has become 6S, the sixth element being safety.

Other than a specific stand-alone methodology, 5S Housekeeping is frequently viewed as an element of a broader construct known as visual control, visual workplace, or visual factory. Under those (and similar) terminologies, Western companies were applying underlying concepts of 5S Housekeeping before publication, in English, of the formal 5S Housekeeping methodology. For example, a workplace-organization photo from Tennant Company (a Minneapolis-based manufacturer) quite similar to the one accompanying this article appeared in a manufacturing-management book in 1986.

Talk To Us Now

Fill out the form and we will be in touch with you promptly.